The opening of steak houses in Singapore often brings with it hunks of red meat, the appearance of the ubiquitous seafood platter or Mac & Cheese and, with it, a chance of predictable sides the likes of creamed spinach. But the debut of a brand new steakhouse at the recently-reopened Raffles Hotel Shopping Arcade gives us reasons to be hopeful that a great steakhouse could in fact offer guests a more food-forward experience.

Enter Butcher’s Block, quite possibly the least known of Raffles Hotel’s bevy of new food and beverage offerings, amongst them La Dame de Pic and BBR by Alain Ducasse, and arguably, its most unique culinary product yet.

In terms of interior, Raffles Hotel has spared no expense in building a space that promises to dazzle. The well-equipped open-concept kitchen is fitted with a brass plated marble-top counter that looks into a breezy 44-seat dining room set against wood panelled walls and a generous wine library stocked with a 200-label strong list that includes bevy of minimum intervention ones.

Helmed by chef de cuisine Remy Lefebvre, a French native with a colourful culinary career that spans Spain, Lebanon, the Cayman Islands and Singapore (where I first met him at Mexican restaurant El Mero Mero in 2016), this 44-seat steakhouse looks the part of a swanky meat house it’s designed to be, with a glorious floor-to-ceiling meat vault overhung with carcasses as centrepiece. But make no mistake, the vault is not a mere eye candy – it’s here that Lefebvre prepares mis en plus and dry ages meats and fish for his bone-in protein repertoire.

Indeed, Butcher’s Block is not your garden variety steakhouse. Its raison d’être are the bone-in proteins, be it the meats or seafood, that will headline your dining experience. You may choose to experience it via the a la carte menu, which is how most steakhouses are presented, or take the route of Lefebvre’s carte blanche menu ($188++)  for a discovery of his signature bone-in proteins together with seasonal off-menu goodies.

Based on our sneak peek of the carte blanche during the restaurant’s first week of operation, Butcher’s Block looks all set to up the ante on Singapore’s up-until-now torpid steakhouse experience.

Lefebvre’s welcome snacks are off to a roaring start – thinly-sliced Kusunoki Wagyu fillet mignon steeped in a delicate oil infused with umami-packed plankton is but the chef’s way of showing you, albeit in delicate portions, what he has up his sleeves. His Cecina de León, beef “ham” that’s been salted, cured for 48 months and dried in the province of León in northwestern Spain, is smoky and smooth, rightly matched with a side of pan con tomate for a whiff of refreshment.

Given his multi-cultural experience, diners gain mileage from the chef’s left of centre take on flavours. For warm entrée, he fields a plump and luscious hand-dived Norwegian scallop grilled over binchotan-fire. Served in its own shell with the mollusk’s liver and intestine but also with a helping hand of a light Madagascar black pepper sauce, the dash of Singapore influence is fitting and oh-so-delicious.

Lefebvre does not turn a blind eye to vegetables. In fact, he has a particular sensitivity to plant-based dishes and thanks to his French upbringing and international experiences, his repertoire is not limited to formulaic steakhouse offerings. With the Southern France globe artichoke he receives, he confits it first and then grills it before serving it with purple artichoke chips and puree for textures, finishing at the table with a drizzle of sweet, tart and mildly piquant Szechuan pepper-spiked black vinegar dressing usually meant for dumplings. On paper, this may sound like a bewildering marriage but Lefebvre pulls it off with mastery. 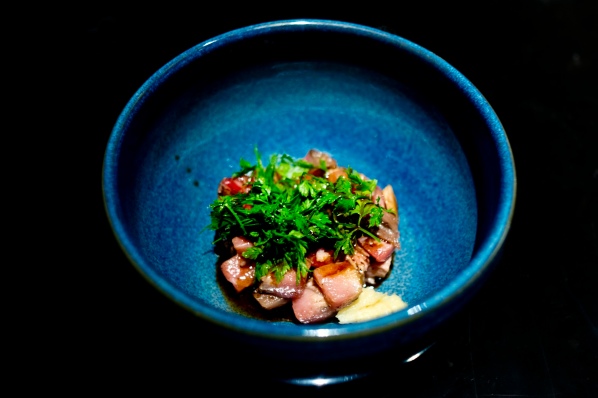 If I have to pick a course most representative of Lefebvre’s philosophy, it would be the ensuing “land meets sea” dish. Cubes of tataki of A5 Wagyu are tossed with cubes of similarly prepared tataki of farmed Belfego blue-fin tuna and served with chervil and dill in a somewhat funky red wine sauce made from a usually discarded tuna cut rich with the flavour of tuna’s blood. I’ve had many a tataki dish, mostly uninspiring, but this boundary-pushing one is a first and most unlikely to be forgotten anytime soon, particularly because it comes with a spoonful of wobbly jelly-like baked tuna bone marrow dressed with the same sauce.

If the fore courses are exciting, it’s because they are building up to the biggest highlights of your dining experience here – the bone-in proteins. At this stage, it is necessary to temper your expectations because what you are about to be served are nothing fancy, just extremely well- executed cuts of butchered seafood and meats that have been portioned, masterfully grilled until beautifully charred on the outside, then sliced by the table and plated. I can’t speak for the others but our turbot arrives exactly how I like it – crisp on the edges with a lick of char and perfectly moist inside.

Bone-in steak is most certainly an essential part of your meal here. The selection from the a la carte is not huge:  a seasonally-changing Daily Cut (during my visit, it was John Stone 28-day dry-aged grass-fed available in various cuts, mostly bone-in), 1.2kg Porterhouse MBS7+ and 1.5kg Tomahawk MBS7+. Japanese Wagyu from the prefectures of Saga  and Kagoshima are also available in various cuts but these are not bone-in. If you’re taking the carte blanche menu, Lefabvre decides, but only after he asks about your meat preferences such as grass-fed or grain-fed. If chef serves the 1.2kg Porterhouse WX by Rangers Valley, a cross bred beef from Australia, you’re in luck – the fork-tender T-bone steak has an even “tan” of light charring and serves four comfortably. Levebfre believes that the quality of the cuts speak for themselves and require no adornment but if you prefer sauces to go with the steak, an array is available for your selection. In case you’re thinking of ordering sides, the steak comes with a side of fresh salad.

As far as Lefebvre is concerned, desserts are not an afterthought, not when he brings you a scoop of sticky Lebanese ice-cream, also called Arabic ice cream, that hails from his wife’s motherland. This he dresses with confit of orange and dehydrated yoghurt, perfect for tackling the richness of the prolific proteins.

If the above carte blanche appeals to you, know that the same menu is available at the 3 metre-long OAK (One Of A Kind) table paired with an unlimited pour of four types of wines at the price of S$398++ per head. If I were you, I would snag a seat at OAK before the crowd swoops down on it.