Lolla was listed as one of Zagat’s “hottest restaurants in the world” in 2013. It was also featured in my article on New York Times here. 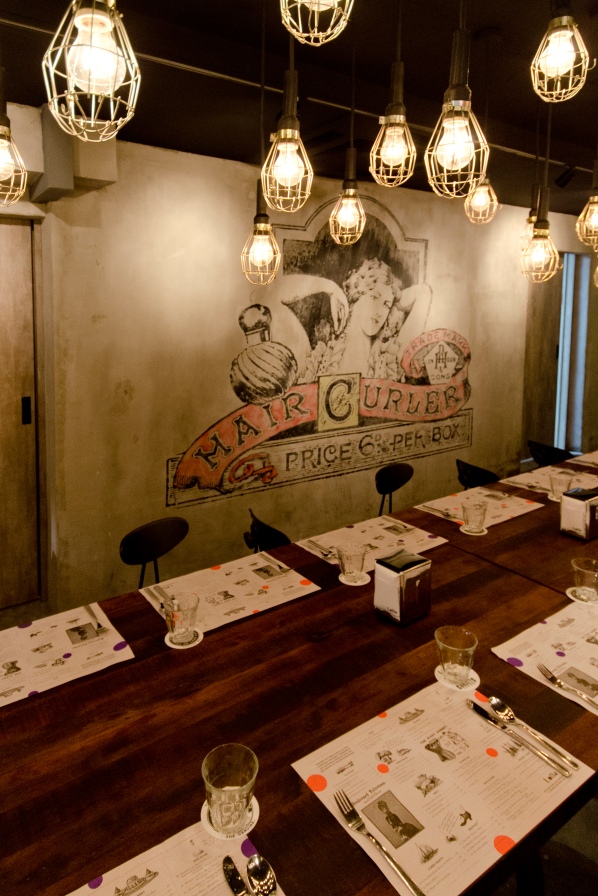 Barely 2 years after running as a pop-up underground supper club, Lolla’s Secret Supper, the guerilla-dining operator has surfaced with a shop front by way of Lolla at the hot-again Ann Siang Hill. Opened since mid September 2012, Lolla is owned by Pang Hian Tee, founder of Lolla’s Secret Supper and distributor of a clutch of grower champagnes, together with 5 other partners including Lee Chin Sin and ThaddeusYeo of Le Bistrot. Occupying 2 levels of conserved shop house space with an original blue Peranakan tiles-clad façade, just doors away from the now-defunct Goto, Lolla proffers produce-driven small plates that are best enjoyed at the 13-seat zinc-topped counter that fronts an open kitchen; yes, these seats do fill-up quicker than you can say ‘Lolla’ and unless you arrive at 6pm to secure a bum space at one of 13 wooden swivel bar stools, you’re likely to be ushered to the mess hall-inspired basement dining room where a 22-seat communal table takes centre stage with eye-catching hanging caged-bulbs. This understated industrial-chic underground space with distressed concrete walls, strangely enough, makes dining with complete strangers fashionably cool.

What to expect?
With the discerning palates of Pang, Lee and Yeo curating the produce-driven menu that features exquisite ingredients from France and the Mediterranean region to Japan, you are assured of blue ribbon small plates – some curiously creative and yet others, reliable favourites – (paired with some really fine wines and grower champagnes) crafted with the finesse of a surprisingly young chef. No, it’s not an imported kitchen talent but a 26-year-old Political Science graduate and self-taught chef, Tan Huang Ming, who eschews white-collar jobs in favour of chef’s white.

The menu features a smattering of Spanish classics like Don Bocarte anchovies (S$24) served right out of the tin it’s packed in, with variations of Spanish standards such as the Spanish tortilla (S$19), or potato omelette, enlivened with clumps of heavenly Belgainsmoked eel flakes that lends a umami-laden smoky finish. Some dishes, like the sliced tomato (S$14) doused in balsamic-accented extra virgin olive oil, are straightforwardly gorgeous and minimally processed, with a singular focus on an excellent produce – in this case, the Kumamoto tomatoes from Australia. Yet others like the Cape Grim grass-fed ribeye steaks (300g, S$52) are painstakingly grilled on a yakitori grill to yield tender chunks that rival the artisan beef cuts from steakhouse joints. Yes, they are all excellent.

But you haven’t been to Lolla if you have not tried the signature sea urchin pudding (S$19), a tongue of creamy raw sea urchin basking in an intensely savoury squid ink custard served in a mini lion’s head bowl – take it from us that this is one dish that you should selfishly hoard and not share.

The folks at Lolla are not shy about professing their love affair with local purveyors of artisan fare – the crusty baguettes (S$6) served with Echire butter are sourced from Maison Kayser, coffee from Chye Seng Huat Hardware (of Papa Palheta fame) and ice cream (try the smoked chocolate ice cream, S$9) from Creamier at Toa Payoh – Lolla seems to have all the ingredients for success and judging from the packed room at dinner, she’s well-on-her way.

Here’s why we love Lolla: it epitomizes the joie de vivre of Singapore’s dining scene  – it’s casual yet refined; it’s metropolitanand rich in every way; while it’s slightly credit card–denting, it’s not pitched at a level that you and I cannot afford; and most of all, it does not need the weight of a celebrity chef (who does not cook in the kitchen) to lure in the crowd. What’s not to love about Lolla?