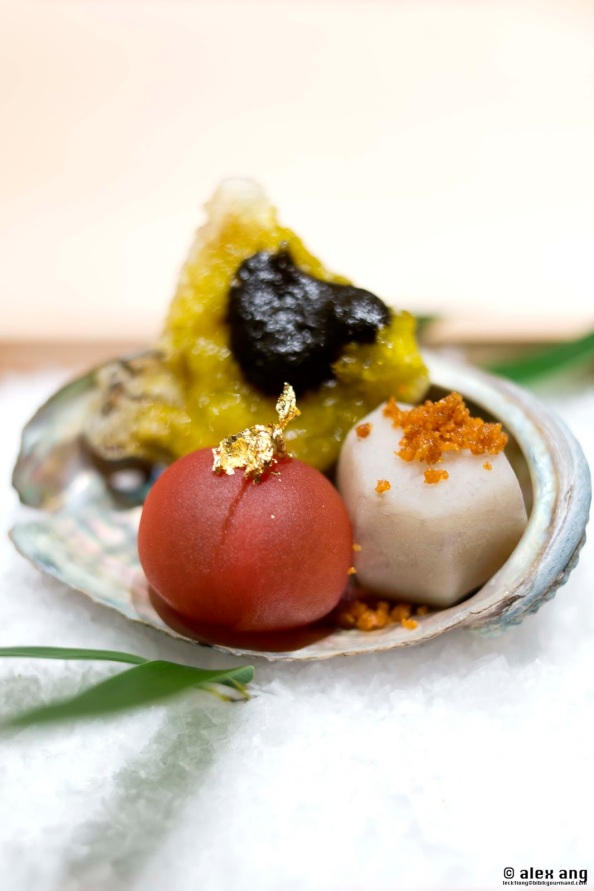 Since 24th June, Hashida Sushi (“Hashida”) by chef-owner, Kenjiro “Hatch” Hashida, has re-opened at a bigger space previously occupied by the now defunct Hashida Garo and Beni on the fourth floor of Mandarin Gallery in Orchard Road.
Taking a maximum of about 36 diners, 12 more than its former digs, with a 14-seat hiba wood dining counter and two private rooms, the Singapore offshoot of the eponymous Tsukiji sushi-ya from Tokyo by Tokio Hashida (temporarily closed) serves omakase-style Edomae sushi.
Price wise, dinner omakase costs S$360++ to S$500++ while lunch is more approachable for diners with varying price appetite – S$80++ (Tsubaki), S$120++ (Ayame), S$180++ (Tachibana) and S$250++ (Hiiragi).
Our dinner omakase (priced at S$460++) during our visit in early July commenced with a small parade of starters, sashimi and a fried course before sushi took centre stage.
There was a tempura-style battered-and-fried abalone with fruit tomato and Japanese yam topped with karasumi (salted and dried mullet roe). (4.25/5)
For sashimi, mizu tako (or “water octopus”) was served with snapper, kinmedai (golden eye snapper) and cooked marinated seaweed alongside an array of condiments headlined by a stunning drizzle of tea oil that provided an added flavour dimension to the standard fare of soy sauce and wasabi. (4.25/5)
Instead of serving sweet ayu fish whole, the fried course presented this popular summer fish deboned, wrapped in burn curd skin and deep-fried. Served with battered-fried sweet corn, green pepper and okahijiki (land seaweed) in a buttery dill sauce thickened with avocado, this presentation of sweet ayu was unconventional but if we have to choose, our preference would be to eat the fish whole, along with its deliciously bitter liver. (3.75/5)
The petite morsels of hand-pressed sushi crafted by Hatch, about eight pieces of them, were the highlights at dinner. Featuring seafood imported from Japan (four times a week from Tsukiji and twice a week from Hokkaido), each sushi course was served with the neta (ingredient placed on top of the sushi rice) beautifully draped over a tiny parcel of lightly-vinegared Akita-sourced shari (sushi rice). (4.5/5)
To start, live Ishigakigai (giant clam) prised open, with innards removed.
Glistening botan ebi crowned with pearls of coral-hued ebi roe that were brushed with soya and plum sauce.
There’s also kinmedai sushi featuring the prized belly cut from the popular whitish-pink red eyed snapper.
Also torched kamasu (baby barracuda) bearing a delicate char for a bit of smoky finish to an otherwise light and sweet fish, served with a refreshing dollop of grated daikon.
Then a little “rice bowl of happiness” crowned with jewels from the sea – Bafun uni, Hokkaido crab and glistening-red ikura.
For the grand finale, layers of otoro and kama toro sushi served alongside a staisfying bowl of clam consommé with fishcakes.
The meal wouldn’t be complete without Hatch’s torched ankimo (monk fish liver) doused in a century-old, heirloom sweet sauce. (4/5)
It did, however, conclude without the chef’s trademark confectionery. Thankfully, fresh cut Japanese fruits came to the rescue to mark the end of a remarkable meal.
#04-16 Mandarin Gallery, 333A Orchard Roa97d, Singapore 238 8; hashida.com.sg