After an eight-month closure, Shangri-La Singapore’s Tower Wing has re-opened and, with it, a brand new look and a host of new restaurants including Nami Restaurant & Bar (“Nami”).

Taking over the former 24th floor space of Blu, which hosted big name chefs like Virgilio Martinez and Massimo Bottura for pop-up dinners, Nami has replaced the now defunct Nadaman as the resident Japanese restaurant of Shangri-La. While the latter once held court on the ground floor of the hotel with a traditional setting, Nami boasts a contemporary space with floor to ceiling glass windows that afford panoramic views of the city’s skyline.

Former Nadaman Tokyo veteran, Shigeo Akiba, presides over the contemporary Japanese space as head chef. With more than 30 years of culinary experience under his belt, including five years under Iron Chef Koumei Nakamura as executive chef, Akiba’s career boasts several highlights including his involvement in the preparation of the wedding banquet of Japan’s Prince Akishinomiya and Princess Kiko, as well as serving Emperor Akihito during his time at Nadaman Tokyo.

Unlike the newer genre of specialty Japanese restaurants that have opened in the city, Nami is neither a sushi-ya nor a kaiseki house; instead, it serves almost the entire gamut of Japanese cuisine including sushi, sashimi, tempura, simmered food, noodles and rice dishes.

That said, Chef Akiba prides himself on his dashi, which the Japanese chef prepares using Rishiri kombu from Hokkaido and katsuoboshi from an artisan producer in Kyushu. You could comb through the menu and, with the help of the staff, pick out the dashi-based dishes or simply order the six-course omakase (S$190++), which features a number of courses that showcase the clean-tasting broth teeming with umami. 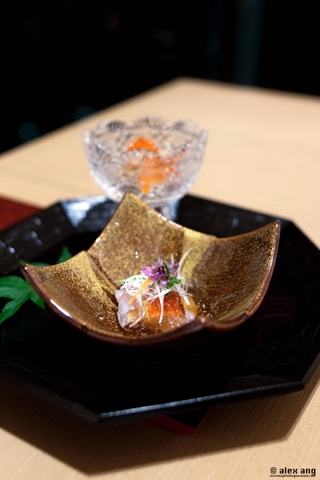 To start, a tiny parcel of seaweed marinated kinmedai with blobs of dashi jelly is served with a side of plump and decidedly gigantic Mikawa Bay asari clam cooked sakamushi-style (in sake) blanketed with a savoury custard cream flecked with with ikura pearls. 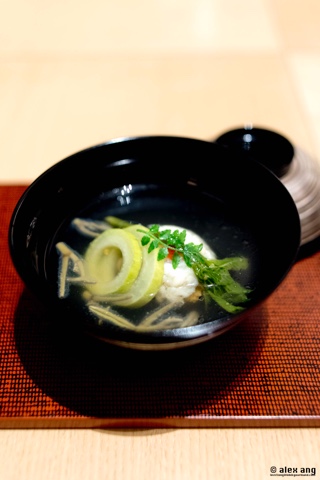 Uni-stuffed hamo with junsai and Japanese pickling melon in dashi

For a taste of summer, Akiba serves expertly cut hamo (pike conger eel) stuffed with uni in a clear dashi broth flanked by rings of Japanese pickling melon and a sprinkle of junsai (watershield). For those who are familiar with Kyo- kaiseki, this dish might teleport you briefly to summer time kaiseki dining in Kyoto where hamo features extensively on the menu. 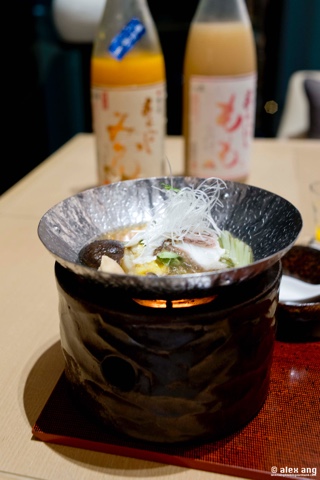 The clean taste continues even in the sukiyaki-style hot pot: sea bream with shimeiji mushrooms and leek in a light soya sauce-scented dashi broth. 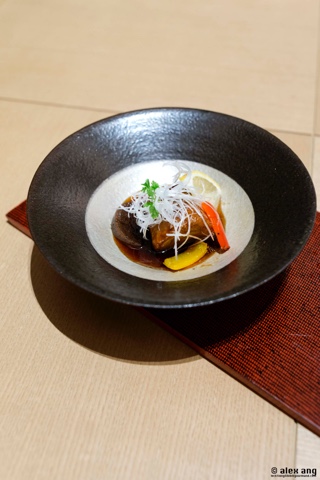 Chef Akiba takes pride in his signature dish of pan-fried tuna head and this dish appears in both the a la carte and the omakase drenched in a sweet sauce spiked with yuzukosho and a squeeze of lemon. 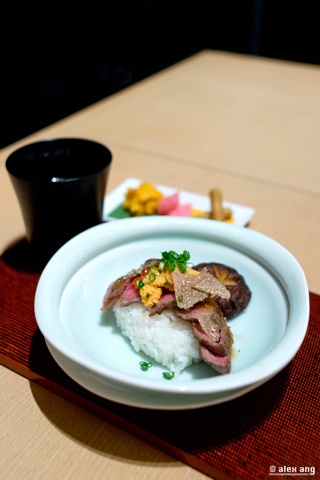 While we much prefer a more extensive appreciation of Akiba’s cuisine, the omakase ends rather prematurely, albeit on a high, with a Saga A4 beef bowl decorated with uni, summer truffles and ikura pearls. It is nothing fancy, just a well-made beef bowl with all the trappings of luxury.

The quality of the Japanese fare at Nami speaks for itself but after sitting through a lovely dinner, we are unsure if it wanted to be a sushi-ya, a kaiseki house or yet another generic Japanese restaurant (albeit a pedigreed one). At the moment, it’s looking like all things to all people. That’s not far from where Nadaman left off.