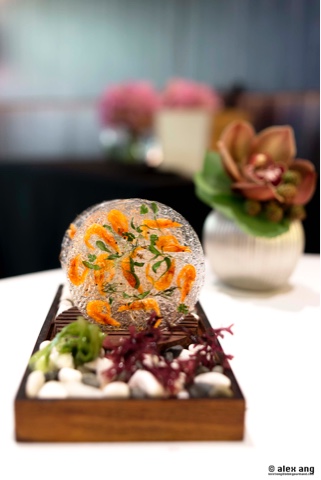 As you know, Iggy’s welcomed new-to-Singapore chef, Aitor Jeronimo Orive, about a year ago. To drum up excitement about his arrival, owner Ignatius took Orive on an eating trip to his favourite food city, Tokyo, and refitted his Hilton Hotel joint to unveil a revamped dining room with a long communal table as centrepiece and a bigger picture window offering a clearer glimpse into the kitchen.

Orive comes to Singapore with strong credentials including time spent in Mugaritz, Fat Duck and Nerua at Guggenheim. His first few months in Singapore was spent finding his feet and my maiden meal with him this time last year was smooth but lacking lustre. Perhaps I visited too early?

Fast forward to 12 months later and how things have changed. My third-trip-in-a-year to Iggy’s, shortly after Orive snagged the eatery’s first Michelin star, turns out to be immensely rewarding.

Orive’s nine course Gastronomic Menu (S$235++) is well paced and weaves in interesting local inspirations. From the local vegetables and other ingredients that Orive uncovers in the Tekka Market to the local influences that inspire some of his snacks, not least his take on McDonalds fillet-o-fish with deep-fried mackerel and the “roti john” with Ayam brand sardines, the menu drives the message across pretty well, that Orive has found his niche and well on his way to recovering Iggy’s lost grounds. And on the way, he will show you snippets of his heritage that has shaped the Spanish-Australian chef’s growing up years spent in Madrid (where he grew up), in the Basque country (where he spent summer with his grand parents) and in Melbourne (where he spent his teenage years).

Chlorophyll “acquerello” carnaroli may not be a sexy name for a rice dish but it’s an accurate, if admirable, depiction of Orive’s ‘loot’ from the local Tekka market that has gone to good use. Carnaroli rice from Acquerello farm in the Piedmont region is cooked with both kang kong and spinach leaves in butter, then served with steamed julienned bitter gourd, pickled sweet and sour mustard green and a kick of spice from sambal (chilli paste) tossed in wing beans. It’s a savoury course with a mildly bitter tone, a whisper of sweet and sour and a kick of spice that delivers umami with a burst of the most bewildering refreshment.

The main dish of Welsh lamb is also a resounding success, in part because the lamb Orive buys comes from a young carcass that was slaughtered before the “gamey” flavour could develop. Cooked a la plancha, it arrives on a puddle of satay sauce that is authentic as it is spicy. Served alongside moringa seeds (or drumstick seeds) that have been cooked in saffron and chicken stock, the pairing is highly unusual and it may take getting used to for some. In my book, the match is curiously harmonious. Delicious without a doubt.

If you’re lucky, Orive may serve you cod kokotxa, the gelatinous underpart of a fish’s jaw that is popularly eaten in the Basque country. It is lightly cooked and served in a nondescript pandan oil-infused pil pil sauce that I am impartial too. I would be more excited if the kokotxa could be coaxed to partner with another sauce that is savoury rather than cloying, perhaps something with exhilarating local flavours?

In case you suspect Orive is leaning towards mod-Sin, he’s not. The dinner opens with agreeable flavours that are decidedly Peruvian – a plump and milky oyster from Galway, Ireland, served in an invigorating tiger’s milk dressing topped with lime snow and finger lime. Spot on flavours.

The flavours veer Japanese in the akamutsu fish. The Japanese-imported rosy seabass is seared a la plancha until the skin is crisp and served with kabura (Japanese turnip) puree dotted with smidgens of abalone liver “miso”.

It meets Spain in the riveting dish of vegetable garden, where 15 types of vegetables including leek, carrot, radish and tomato arrive in a delicate bath of profoundly savoury yet amazingly light jamon dashi.

While Orive may not be a man of many words, he has an innate talent at telling his story through the dishes he serves, each so minimally composed yet refined and mostly well executed. Best of all, the stories are never about the techniques he uses but where he’s been, where he’s grown up and where he is right now. How succinctly he’s captured this in a tasting menu is a tour de force rightfully rewarded with the star he’s scored for Iggy’s last month.

I can’t wait to read the next chapter of his story.