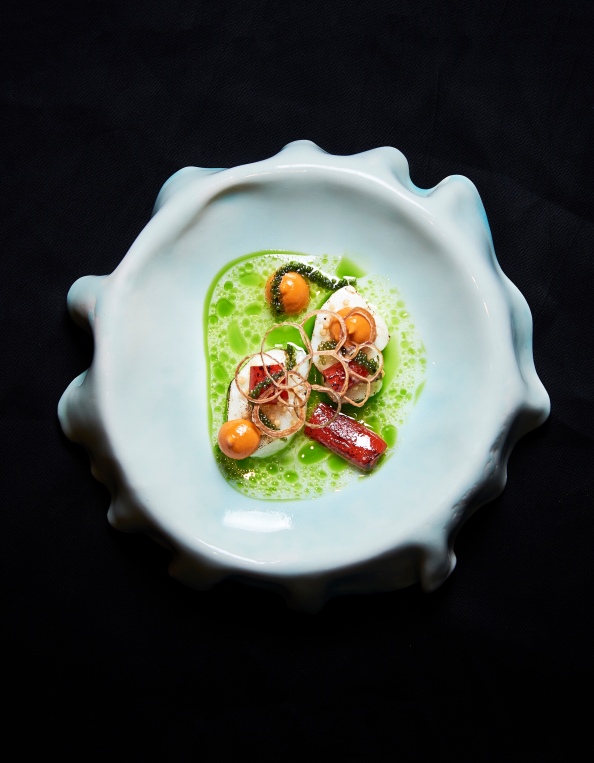 If you’ve visited Alma in its early days, you would know of French chef, Christophe Lerouy (“chef Lerouy”), who cut his teeth with the renowned French chefs of old including Guy Martin and the Pourcel Brothers and once worked as sous chef at The Lighthouse Restaurant. After snagging a Michelin star for Alma on 2016, chef Lerouy has moved on, not once but twice. First to Dstllry and then to his own space at Stanly Street, Lerouy, which he conceived with the backing of two local chefs – Willin Low (Wild Rocket) and Gwen Lim (Pattiserie G).

The restaurant’s setting is simple, almost bare, with exposed beams, cement walls, a feature wall of the mountainous landscape of the chef’s hometown of Alsace and a completely open kitchen that serves a free-form, wave-like counter catering to a maximum of 26 guests.

Perhaps the lack of embellishments is all for the better to keep the focus on the modern French fare on offer. Unlike in Alma when he was executing Asian-fusion French, chef Lerouy now serves his own borderless cuisine built on French techniques. His choice of flavours are at once lighter and punchier than your typical French and his matching of ingredients curiously unorthodox.

Who would have thought of pairing cabbage with lardo (during my visit lardo was replaced with dried pork cheek), egg yolk puree and lime gel and serving it with a dazzling green drizzle of in-your-face umami bomb prepped with blitzed anchovies, parsley, garlic and brown butter? Such is chef Lerouy’s way with what most perceive to be a mere vegetable.

The charm offensive continues with the oyster course, a Japanese mollusc almost the length of my index finger, poached simply but paired unconventionally with a veil of pancetta draped over it. Chef Lerouy serves the veiled oyster in a shallow bath of iberico pork broth flanked by cubes of foie gras ambrosia and dollops of apple wasabi puree. Think of the layering of flavours – briny, savoury, buttery and zesty, missing only the distinct nose-hitting punch of the wasabi, which was supposed to be in the assembly but which we could not discern. Quite exhilarating!

While some chefs are still catching up with the ceviche trend, Chef Lerouy has taken the tried-and-trusted cured fish dish to another level. He takes slices of Patagonian toothfish and cures it in a brew of lime, tomato water and herbs. Before serving, he torches the fish and serves it with sea grapes and a mellow capsicum sauce in the warmed curing broth of the fish. Drinking this elixir feels heart-warming and at the same time refreshing.

Unlike at Alma when he was cooking classical French with South East Asian twists, chef Lerouy’s culinary approach has evolved into a more eclectic style (phew!) that emphasises multi-dimensional flavours. The courses are never rich and almost always underscored by acidity. At times, he pairs the most unlikely ingredients, think chocolate and wasabi in a dessert course. Thankfully, the dishes are mostly tasty. But what excites us most is the French chef’s willingness to push the boundary on cooking. That’s not to mention that a meal here will not cost you an arm and a leg: lunch goes for $38++ (petit) and $55++ (grand) while dinner is available at $98++ (petit) and $128++ (grand).

If the crowd at lunch is anything to go by, diners appear to be lapping up the potential Michelin-starred restaurant-in-the-making.